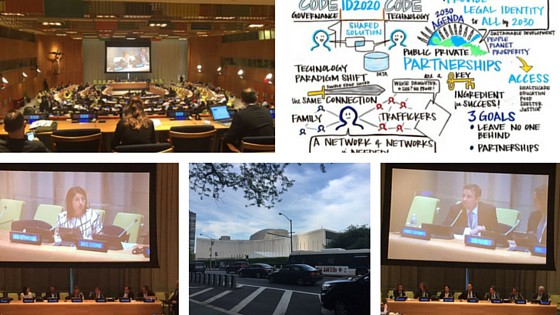 Identity is not an existential crisis, not even for those of us with the luxury of indulging in one from time to time. It’s a fundamental necessity and human right, and a crucial proof point to have access to the systems we’ve put in place by social contract: government and financial services.

And nearly 1.5 billion people lack a legal identity. That’s over 20% of the world population. That is a staggering number of people who are denied the basic human right, according to Article 6 of the 1948 Universal Declaration of Human Rights, of the right to “recognition everywhere as a person before the law”.

Last Friday in New York, appropriately, at the United Nations, several hundred of us with a vested interest in the question of identity relating to the financial services industry gathered to discuss and debate IDENTITY the noun, the verb, and the state of being at the first ID2020 conference, organized by Susan Joseph and John Edge.

There are a number of fabulous commentaries post event, and I highly encourage you to take the time to read them. Chris Skinner’s take on some of the challenges around identity (hint: it’s not technology that’s the problem, it’s the dearth of trust for the system) is worth the read, as is his blog on the inhumanity of denying identity.

[Please, please take a moment to read Chris’ blog on inhumanity. He’s curated the real reasons behind why this matters: the personal, the heart wrenching, the brutal and violent abuse that is inherent for those who live without official identity. It will give you perspective on why ID2020 matters most: the human cost and suffering,]

John Edge has shared his motives for creating the organization and why he is passionate about finding a workable solution touches a nerve when he mentions that 230 million children don’t even have birth certificates — and the implications for exclusion and exploitation.

In fact, the entire day can be summed up by this Twitter stream roundup.

It’s no surprise that the industry’s darling panacea got a lot of airtime: blockchain solutions to immutable identity were the primary focus of the day. From Bitt to BitFury Group, and Digital Assets to Case Wallet, and Bloq — all asserted that blockchain is a viable answer to managing identity. And perhaps it is, but no one is going to propose it as the ultimate tech solution to identity just yet even though it offers a decentralized approach alternative to the centralized (purely governmental) approach most have been reticent to adopt. From the financial services industry perspective, a joint venture to manage identity between banking and government makes sense — and it extends the notion of inclusion into the money movement ecosystem to those currently disenfranchised.

(A side bar workshop over the weekend aimed to propose several technical solutions, no doubt including blockchain and biometrics as possible options).

But what was striking in its absence from the conference was the voice of those who live without identity. Instead, we heard from their advocates. The formidable Jaz O’Hara who founded The Worldwide Tribe, shared story after story of the refugee crisis in Calais, Turkey and Jordan, where she and her brother Nils and the rest of their team have been in the trenches to help refugees get access to WiFi and communication services, as well as water, food, shelter and clothing. (They are actively raising funds, you can donate here.)

Pathfinders Justice Initiative founder R. Evon Idahosa shared story after story of women and children without identity being sold into sex trafficking, highlighting the violence and violation women in Nigeria experience at the hands of Boko Haram.

I honestly don’t know that hearing directly from someone without an official identity would have more potently driven home the importance of finding a solution, but I wonder if a sense of greater urgency would have washed over the gathering, and instead of us waxing philosophical about the technological answers, we might have directed our energy towards finding resources and immediate solutions for those boots-on-the-ground working day in and day out with refugees themselves.

And yet here is where that thought and the tech discussion come full circle for me: BanQu. BanQu actually won best of show the previous week at FinovateSpring, and they’re putting identity on the blockchain. They’ve created a platform that provides an “Economic Identity” for people who exist outside of the financial services ecosystem using a selfie (hip hip hooray for biometrics). One of the co-founders of BanQu, Hamse Warfa, is himself a former refugee from Somalia. It’s a proof point that those who intimately understand the refugee life are in the perfect position to guide the creation of solutions that can best address the problem of identity.

ID2020 took me on an emotional roller coaster, and I left the UN that sunny Friday evening inspired, frustrated, encouraged, disheartened, and hopeful — mostly hopeful. Hopeful because the industry to which I belong isn’t just looking at identity as a business case, but looking at it from a humanitarian and moral framework. Identity is a fundamental human right, and we have a means to ensuring everyone on this planet has it. What’s more, those of us who gathered together at ID2020 have made the commitment to making it happen — and that gives me hope.