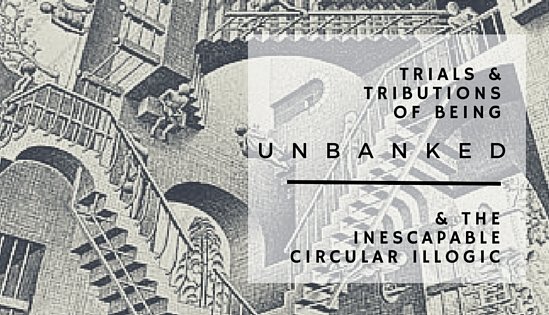 There are times when life decides to serve up a healthy dose of reality — and the lessons provided are exercises in building empathy. Or so I’ve concluded. And life, at this very moment, has determined that one who speaks about the unbanked ought to actually experience it in full Technicolor.

Hey, I’m Ghela. And I officially am a member of the unbanked population.

Okay, okay, so I’ve only got my toe in the water, at most a foot, and really, the waves aren’t lapping at my ankles in any menacing way. In the United States, I’m still banked. I have several bank accounts from several different institutions. I have easy, seamless access to my money, and I pay nominal pennies to make sure it moves smoothly.

But in the UK, where I now reside, I am very firmly a member of the Unbanked, and believe me, that noun is capitalized.

I’d been warned that opening up a bank account in the UK was an exercise in frustration. I’d heard horror stories from expat friends about when they first arrived in Great Britain. I secretly laughed– alright, I chuckled out loud — thinking that Fintech had evolved enough over the last couple years to smooth the way for the likes of industry members like me. Did I mention that reality is inclined to smack us upside the head with a helping of humility, too?

I’ve checked in with every single high street traditional bank in London, all of which require proof of identity (oh, identity is so NOT an existential matter anymore) and proof of address. With a US passport, a UK biometric resident card, and several other foreign government issued documents that confirm I am who I say I am, my identity is in the bag. I don’t lack from what millions of refugees struggle to secure: paper proof. [Side note, my current favorite blockchain use case involves, you guessed it, immutable proof of identity.]

Instead, I lack an address. So here’s the kicker: most property management organizations require you to have a bank account before leasing a home. All utility providers require you have a bank account before they turn on service. Even securing a local SIM card involves a credit check — which is impossible for an unbanked person (so say hello to a bare-bones pay-as-you-go service, and keep in mind that a mobile phone bill is not acceptable proof of address). A new resident has to apply for a National Insurance number (NIN), which, you guessed it, requires you to have an address to which to send the paperwork (and no, a PO Box won’t cut it). Same goes for a permit drivers license, which also requires a NIN. These things, mind you, constitute the list of acceptable proof of address required to open a current account — the majority of which of which require a bank account to procure.

Anyone else catch a whiff of a that circular staircase a la MC Escher? I am stuck in a Relativity cycle — one which has no on ramp nor off ramp in sight.

Ah, but where’s Fintech in this story, you ask. It’s there, still on the side line, although with a few slights of hand and hat tricks, could possibly provide an bridge to the Banked Camp. I explore the pre-paid debit card route via Mondo, Revolut and Loot. All of which I really, really like (and use now that I’m banked) — but in order to put money on the pre-paid, you guessed it, one needs a UK bank account. I tried work-arounds galore to link them to my US accounts, but alas. Alas, indeed.

My saving grace was in Monese. Currently they offer the mobile app via Android only, but thanks to Norris Koppel, who graciously signed me up for the Apple iOS beta test, I had my first UK bank account within minutes. The full iOS app will go live later this summer.

In fact, the most meta fintech moment of my life happened thanks to Norris: I opened a fintech bank account on my mobile, and verified my identity with a selfie, while sitting in a blockchain event at Level39.

Most. Meta. Money. Moment. Ever.

So this begs the question, why is there seemingly only one fintech solution out there to ease the transition to High Street Banking? Most immigrants are looking for basic current account services: an account for deposits and a debit card for simple payments. Savings, loans, ISAs, money markets and CDs: all those can wait. The most pressing matter is where to put, and how to draw on, our money.

*As a side note, I’ve found it quite amusing that it’s difficult to get someone to take my money for goods or services I am aching to purchase here in the UK. I’ve begged and pleaded to give companies money; they don’t bite. But this is a discussion for another time.*

Luckily, I’ve also been able to graduate to a High Street Bank account at Lloyds. The Expat Program they have set up actually addresses my very simple needs, and is the stepping stone to future savings and loans (dare I say mortgage loan) in the near future. Thanks to Joe Street at Lloyds, the excellent team at the Finsbury Square Branch, lead by Linda Lomotey, enrolled me in less than an hour. They also only needed my passport and Resident card.

Why don’t other banks advertise this service? Lloyds now has a new grateful client, who because of her very big mouth, will be singing praises and sending new customers their way.

Why aren’t there more fintech banks like Monese filling the void? Monese has simply, and elegantly, created a solution that meets a pressing need. Why are they the only one who recognized this?

People move just as often as money, and their money ought to be part and parcel of their identity — since it practically is anyway — at every step of the move.

My experience was full of mishaps, futile attempts, and endless frustration — a lost passport for one (thanks to the kind person who hunted me down to return it). I would hate to imagine how fraught with difficulties it could be for someone truly unbanked, who doesn’t have access to information, or friends in banking who can help. What strikes me most markedly is that as an industry we are excluding people who are clamoring to let us help manage their money, who only want to gain access to a system that we claim exists to serve them.

It’s that last bit that is painfully ironic.

My time as an Unbanked person was relatively short — a mere 7 weeks really — but the two key lessons it provided are lifelong. First: patience is a virtue, if only to save one’s sanity. And second: humility lends itself to empathy, and empathy seeds the desire to find solutions.